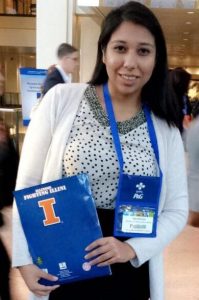 Ana Artiaga is a senior in Agricultural and Biological Engineering who participated in the Engineering for Social Justice Scholars Program. She has a HUGE passion for engineering and social justice, so this class was perfect for her!

The Engineering for Social Justice Scholars Program put on a STEMposium, and Ana shared a spoken word piece on “The Privilege of a Latina in STEM.” In it, Ana discusses her encounters with privilege throughout her time at Illinois.

When she first walked in to her Engineering for Social Justice Scholars Program class, she was not only the only Latina present, but also the only Latinx in the entire classroom. She states “I guess at this point I should have already been used to being the only Latina in a classroom considering I study engineering, right?…I like to think of it as a game of Finding Waldo. There are tons of engineers everywhere in the picture and then when you look looong and haard, ‘oh you spotted a Latina.'”

Privilege was a hot topic during her class. They even did a Privilege Walk exercise where every time they took a step back representing how unprivileged they are. Ana wasn’t hurt or surprised to find that she was the least privileged within her class. She was angered by the “lack of understanding of social inequalities based on identity, power, and privilege some have.”

Despite being the least privileged in her Engineering for Social Justice Class, Ana states that “I attend one of the BEST engineering schools in the nation. I am PRIVILEGED.”

Click here to read “The Privilege of a Latina in STEM” by Ana Artiaga. 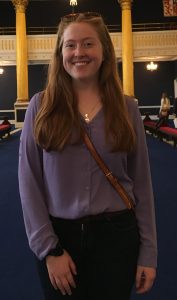 Siobhan Fox is a sophomore in Systems Engineering and Design who sang a touching piece called “Prayers from the Wolves Den” at the STEMposium in December 2016. In her song, Siobhan talks about the inequality women face every day and how it affects everyone.

Here are some lyrics from the song:

Because of petty arrogance

Together we achieve success

If we celebrate intelligence

Click here to read “Prayers from the Wolves Den” by Siobhan Fox.

Kendall Furbee is a sophomore in Materials Science and Engineering who presented a powerful piece titled “Role Model in the Making” about women in STEM and the hardships that they face.

Kendall talks about how from an early age, girls are pushed to develop their social-emotional skills instead of learning to build and think analytically. Fortunately, she was exposed to STEM and fell in love with problem solving to make the world a better place. However, her pursuit of engineering hasn’t been easy. Some of her classmates’ treatment caused her to constantly ask herself why she even attempted to “do something that apparently, I was not meant to do.”

Kendall’s experiences and passion for gender equality eventually led her to a start-up nonprofit called MakerGirl. As part of this, she and other volunteers drove all over the United States in their mobile 3D printing lab inspiring young girls across the country. At the beginning of almost every session the girls are quiet, but by the end of the session they are “bubbly and inquisitive, asking one another what they designed and listing all of the unique things they would choose to make if they had the chance to use a 3D printer again. The girls leave the session with a 3D print that they designed themselves, new friends, and the mentality that STEM is a girl’s game too.”

The most emotional part of the trip for Kendall was when a mother in Tulsa approached Kendall with tears in her eyes, thanking Kendall and shower her appreciation for their stop in her city. “She told me that her daughter loved STEM but never had the chance to experience an encouraging environment.” Kendall could see a bit of her younger self in that child that day. She, like Kendall, had a passion for building and creating. Kendall is proud to be a woman in engineering because she knows she “can personally change the lives of young girls by exposing them to STEM.”

Kendall believes that “Investing in women in STEM is investing in a better country. We are entering a new era of technology, which will only benefit by an influx of creative minds and thinkers. By positioning myself on the forefront of this movement, creating a new generation of women leaders, I am able to transform my negative outlook into and unstoppable positive force.”