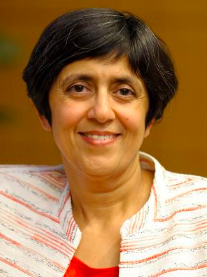 Sarita Adve is a Richard T. Cheng professor of Computer Science at Illinois. Her main research focus is hardware-software interface and she has contributed to a wide range of fields including computer architecture, programming languages, operating systems, and applications. She is currently working on scalable system specialization and approximate computing. She teaches computer architecture courses at the university and has taught CS 433 (Computer System Organization) and CS 232 (Computer Architecture II) among others.

While growing up in India, she had a deep interest in STEM and wanted to pursue it in her studies. Although she had no clue at the time what engineering was, she decided to take the highly competitive entrance exam for the elite Indian Institute for Technology (IITs). When she was accepted to IIT Bombay, she signed up for Electrical Engineering. “I wanted to do computer science but I didn’t quite meet the ranking cut-off to get into the computer science department,” she said. “So I went into electrical engineering but I kept working on the computing aspect which was mostly hardware at the time. I really liked it and that’s how I ended up where I am.”

One of her many accomplishments is the co-development of the memory consistency models for the C++ and Java programming languages. Adve used her hardware background, along with her interests in software, to find a new approach to the memory model problem. “I took a more interdisciplinary approach and looked at the problem of memory models as an interface problem between hardware and software, while most people before me saw it as a hardware problem,” she said. It took a long time for her new ideas to be accepted- she developed the model as part of her PhD thesis in 1990, but the ideas were adopted by Java in only 2005.

Adve is the recipient of numerous awards, such as the 2018 ACM/IEEE-CS Ken Kennedy award,  the 2008 ACM SIGARCH Maurice Wilkes award, a 2005 IBM faculty award, and a 1995 National Science Foundation CAREER. She was named a Woman of Vision in innovation by the Anita Borg Institute for Women in Technology in 2012, an IEEE fellow in 2012, an ACM fellow in 2010, and a UIUC University Scholar in 2004. Despite her many achievements and accolades, she humbly says that her proudest moments come from seeing her students and children succeed. “If I think about what makes me feel really good, that’s what it is,” she adds.

While she has never faced overt discrimination, Adve has had to deal with biases and subtle discrimination. “My choice has been to not worry about this and just keep going,” she said of her experiences. She has also taken it upon herself to confront and challenge these biases for the world’s future engineers after realizing that these stereotypes are heavily prevalent. Whether Adve is implementing changes in the computing world or working towards reducing discrimination, she values strong leadership and believes that it is most important to make sure that, as a leader, you are empowering others. Her leadership mantra is that “a good leader should enjoy seeing the people around them succeed.”

Adapted from an essay by Stine Holst, Danielle Plecki, and Rati Rastogi, December 2018