Carol Craig is driven by Ray Bradbury’s quote, “Sometimes you just have to jump and build your wings on the way down.” 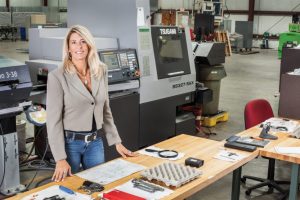 Craig graduated from Engineering at Illinois in 1990 and got a job writing software programs for Cummins Engine Company in Indiana. She soon moved on to writing Avionics software at the Naval Air Warfare Center. Her work there inspired her to apply for the Navy flight program, in which she became a Naval Flight Officer.

After a knee injury and problematic surgery ended her military career, Craig began work as a consultant. She is now the CEO of her own Craig Technologies, a company that employs over four hundred people. The company landed a contract with NASA, running its Supply Logistics Department.