Xiuling Li is a very active faculty member at Illinois. She is a professor in the Electrical and Computer Engineering department. She has held an affiliate position in the Beckman Institute since 2007, in the Material Research Laboratory since 2010, and in Mechanical Science and Engineering since 2011. 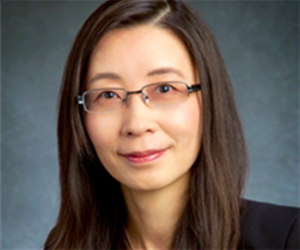 Li earned her Bachelor’s in Chemistry from Peking University in China. She then attended UCLA, where she earned her Master’s and Doctorate degrees in Chemistry. Apart from her current roles at Illinois, Li has a strong research background and significant industry experience. She worked as a postdoctoral research fellow at CalTech, and was postdoctoral research associate and then a research assistant professor at the University of Illinois. She believes that her educational journey was fairly linear, but the turning point in her story began in her Postdoctoral fellowship at Illinois when she switched from Chemistry to Electrical Engineering. At Illinois, she was assigned a “high risk, high payback project.” This project ignited her interest in semiconductors, and kicked-off her engineering career. Without her knowledge, Li was the only woman working in the semiconductor fabrication cleanroom during that time. She eventually found out of her singularity when it was mentioned to her by fellow coworkers. When asked about her feelings on this, she says, “I wasn’t really aware of or influenced by what other people thought or said of me.” She hopes that more people, not just women, will defy stereotypes and learn to allow themselves to develop their own life paths. Her background in semiconductors led her to join a startup company, EpiWorks, with some of her colleagues from Illinois. This company is based out of Champaign and develops and manufactures high-performance semiconductor epitaxial technology. Li was hired as a Senior Engineer in 2001 and then assumed the role of R&D Manager in 2003.

Li then found herself at a standstill when deciding between continuing in the industry or accepting a faculty position here at Illinois in 2007. She ultimately made her decision because “her eyes sparkled” when speaking about the faculty position, according to her friends; and because of all the guidance and encouragement she received from many of mentors, especially her postdoc advisor and lifelong mentor, Prof. James Coleman. She believes that “fear will stop people [from making a decision]; but passion is what will allow you to go forward,” and advises to stop overthinking and start doing the things that excite you.

Li has earned many awards and honors throughout her technical career. Her proudest honor has been the IEEE Fellow, a distinction reserved for no more than one tenth of one percent of IEEE’s membership, that she was awarded in 2017 for her extraordinary accomplishments in the field of engineering. The same goes for the American Physics Society Fellow she was elected to be in 2018. She explains that she is totally humbled and grateful for this type of validation and recognition of her scientific contributions from her peers. She also takes a great amount of pride in the inventions she and her students produced over the years.

She points out that “Over the years, we’ve invented things because we pay attention.” Her face lights up when she tells the stories of how her inventions came to be, and how it’s not often that her research goes according to plan. She laughs about how “several of the patents were all because of accidents. We happened to notice that something was different than what we thought it would be.” Some of her patents include a method of forming an array of high aspect ratio semiconductor nanostructures, miniaturization of on-chip inductors, and a method of fabricating planar semiconductor nanowire arrays.

When looking back at some of her major career and life choices, such as becoming involved in semiconductors with a background in Chemistry and choosing a faculty position over a her position at Epiworks, Li speaks of how she did not hesitate. She believes that “fear will stop people [from making a decision]; but passion is what will allow you to go forward,” and advises to stop overthinking and start doing the things that excite you. Li believes that confidence in your own abilities is an integral part of being a woman in engineering. She states that, unfortunately, sometimes whether you succeed or fail will be related back to the fact that you are a female, and that only your confidence can help you block out those judgments. When asked about the underrepresentation of women in engineering, Li answered: “for any group to make a lasting impact, you need to have the critical mass. And [women in engineering] are certainly not there yet.” But she, like many of us, is hopeful for a reality in which the critical mass is women.

Adapted from an essay by Maram Safi and Megan Walsh, December 2018