When Shobha Vasudevan was completing her final year as an undergraduate student at the University of Mumbai, India, she was sure that she had finished her schooling for good and would head off to industry. Regardless, she applied to graduate school, concluding that she would only have a problem if she got into a desirable program. Shortly after, she was invited to continue her studies at the University of Texas at Austin for her M.S.E in Computer Engineering, and in December 2008, she successfully completed her PhD at the same institution. 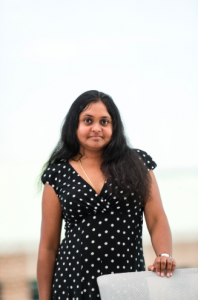 Now an Assistant Professor at the University of Illinois at Urbana-Champaign in the Electrical and Computer Engineering Department, Vasudevan notes that without her studies following undergrad, she would have never truly uncovered her love of learning. “Students come in with a totally different mindset, [and] when they leave, they have the ability to think really hard, to work really hard, and to believe in something that is not well defined, all of which I wouldn’t have ever come across if I had just taken that job after undergrad,” she said.

Vasudevan came to Illinois following her PhD in January 2008, and now stands as a highly versatile professor in the ECE department after teaching introductory level courses, senior level courses, and graduate level courses. She has always been delighted by the passion and dedication of her graduate students, but she also appreciates teaching a class size of roughly 300 first-year students because of the large-scale impact she can have on the student body. Her work has earned her many awards, including the honor of Best Paper Award in DAC 2014 and the YWCA Leadership Award in 2011.

Outside of her teaching, Vasudevan has a vision to connect women in the workforce with the implementation of MyTri, a networking portal for female engineers. With this network, women throughout their careers can communicate mentorship, sponsorship and recruitment opportunities, a resource that is vital because of the lack of interaction women in engineering- and particularly computing- have with other women in the office. “My students were male. My colleagues were male. My bosses were male. Everyone who stood out to me was male. I never had a female mentor,” she said.

Vasudevan has also spent the last ten years developing ECE 462: Logic Synthesis. Through ECE 462, she makes an effort to work with female engineering students and any struggles they may be having, whether they be the course material or personal issues outside of the curriculum. During mentor sessions, she notes that the female students often doubt their abilities even as they excel in the classroom environment. Vasudevan hopes that girls will begin to give themselves more credit and trust their technical competency.

“I think girls should be more confident,” she said. “We are worth so much more than we think we are, and we should act like it, and believe it, too. We shouldn’t step back from opportunities because we don’t think we are good enough. That’s my hope.”

Adapted from an essay by Bryn Carroll and Nora Dunleavy, December 2018