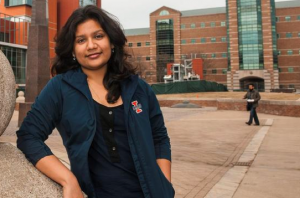 Sakshi Srivastava completed her Bachelor’s degree at Illinois in 2015, and is currently pursuing her Ph.D. She spoke at the 2016 TEDxUIUC, recounting her journey from a small Indian city to a large public university in the USA. Her flair for ‘engineering her way’ around situations, coupled with her enthusiasm to try something new, made her a pioneer and taught her valuable life lessons.

Srivastava was also a champion for the installation of the new “Quintessential Engineer” statue (nicknamed Quinn) on the north quad. Her mission began in 2014 when she started spreading the word about her idea, inspired by an article how public art can reflect the thoughts of a community and foster unity. “Some people think this whole thing is a competition to ‘Grainger Bob,’ [the male statue outside Grainger library] but it’s not, it’s something for women in engineering, women who want to be engineers, women who want to bring change,” Srivastava said. The statue is intended to encourage more women to pursue engineering degrees she wants women to be seen as deserving of their accomplishments in these fields. The statue was funded by Texas Instruments and was unveiled during the Spring 2017 semester.

Read about Srivastava’s proposal for Quinn here and her success here.