Lorella Jones came to Illinois in 1968 and became the first woman in the College of Engineering on the tenure track. 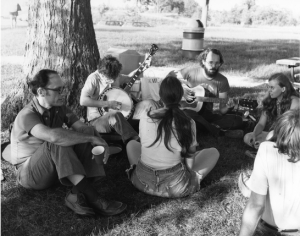 From early on with Illinois’ internal computer system PLATO, Jones was a proponent of the use of computer-related technology as a learning tool in education. Later in her career, she became director of the Computer-Based Education Research Lab.

“The thing that most impressed me was her sense of herself, which was very straightforward,” said Ralph Simmons, former Physics Department Head.

She made influential contributions in the physics department and later wrote an essay titled, “Intellectual Contributions of Women in Physics.” In her free time she enjoyed playing the banjo (as shown in the photo above) and spending time outdoors doing activities such as kayaking and gardening.

Photo:Department of Physics, University of Illinois at Urbana-Champaign