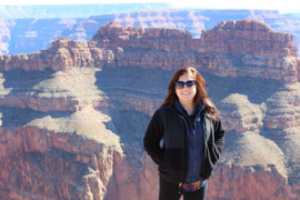 Kimmi Slaughter grew up in southern Illinois outside of St. Louis. After graduating with her BS in mechanical engineering, she took a job in the Chicago suburbs. She currently lives in Naperville and works for Navistar in Lisle in their rotational program. She does four 6-month long rotations in different areas of the company. She’s about to finish her first rotation in procurement and after the new year she’ll start her next rotation in body engineering.

During her time at Illinois, Kimmi produced an impactful short film encouraging parents to support their daughter’s engineering interests (included below). She said the reason she made the video is because she took Art 350: Writing with Video second semester of her senior year. “I’ve always had a love of film production and this class finally gave me an outlet for it. The final in the class was a “This I Believe” project. I knew the only thing I felt strongly enough to compose a 6 minute long video about was women in engineering”. She sat down and wrote her “This I Believe” essay which eventually turned into the script used in the film. She knew she wanted to target parents as the target audience because of the influence they have on their daughters as they grow up.

She asked friends she knew from various engineering majors to be in the video because she prefers to be behind the camera rather than in front of it. She thinks a lot of people watching the video will see it as a series of interviews, but really those featured in the video are voicing Kimmi’s personal thoughts and experiences and giving a face to her story.

She was excited about the recognition her video received. She never realized people would like the video as much as they did! Kimmi is thrilled to spread the important message to support young women in engineering. Enjoy her video and spread the message!