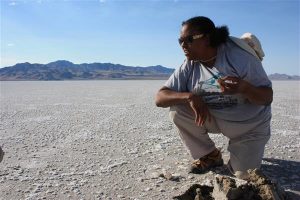 Astrobiologist Kennda Lynch loved the possibilities available to her as a student at
Illinois.
“It was the first place that I felt would let me explore everything,” Lynch said of the university. She double majored in general engineering and biology through the Engineering/LAS 5 year dual degree program and graduated in 1999 with B.S.s in general engineering and biology.
Lynch received her master’s in Aerospace Engineering Science from the University
of Colorado Boulder in 2008 and her Ph.D. in Environmental Science and
Engineering from Colorado School of Mines in 2015.

After working as a systems engineer for Lockheed Martin Space Operations, earning a NASA fellowship and studying Mars as a postdoctoral fellow, her astrobiology career has reached a new frontier; Lynch was featured in the Netflix series Explained, by Vox, in which she talks about extraterrestrial life.

Turn down the lights and enjoy an engineer’s take on life on other planets: https://www.netflix.com/title/80216752