In the early 1930s when she was five years old, Betty Lou Bailey went on a tour of a hosiery factory and was so impressed by the automated knitting machines that she would recall the experience decades later.

“Little did they know that this little five-year-old girl was someday going to be a mechanical engineer,” Bailey said. 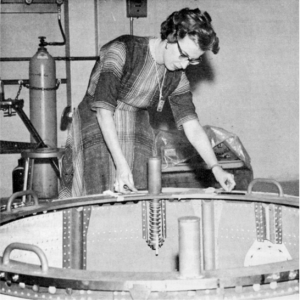 Bailey came to Illinois as a freshman in 1945, a time when there were very few women studying engineering. She was the only woman in her class to graduate from the College of Engineering, doing so within the top three percent.

At her first permanent position with General Electric, Bailey designed and patented an aircraft variable exhaust nozzle that allowed hot gas flow. She later went back to school for her Master of Engineering degree and also became involved with the Society of Women Engineers. Her work, contributions and achievements led Illinois’ Mechanical Engineering Department to name her a Distinguished Alumna in 1988.

Read an interview with Bailey here.